Asha Gond, 21, with her skateboard. She tried the sport when a skatepark was set up in her rural village and is now one of India’s top female skateboarders. Aslam Saiyad/Barefoot Skateboarders Organization hide caption 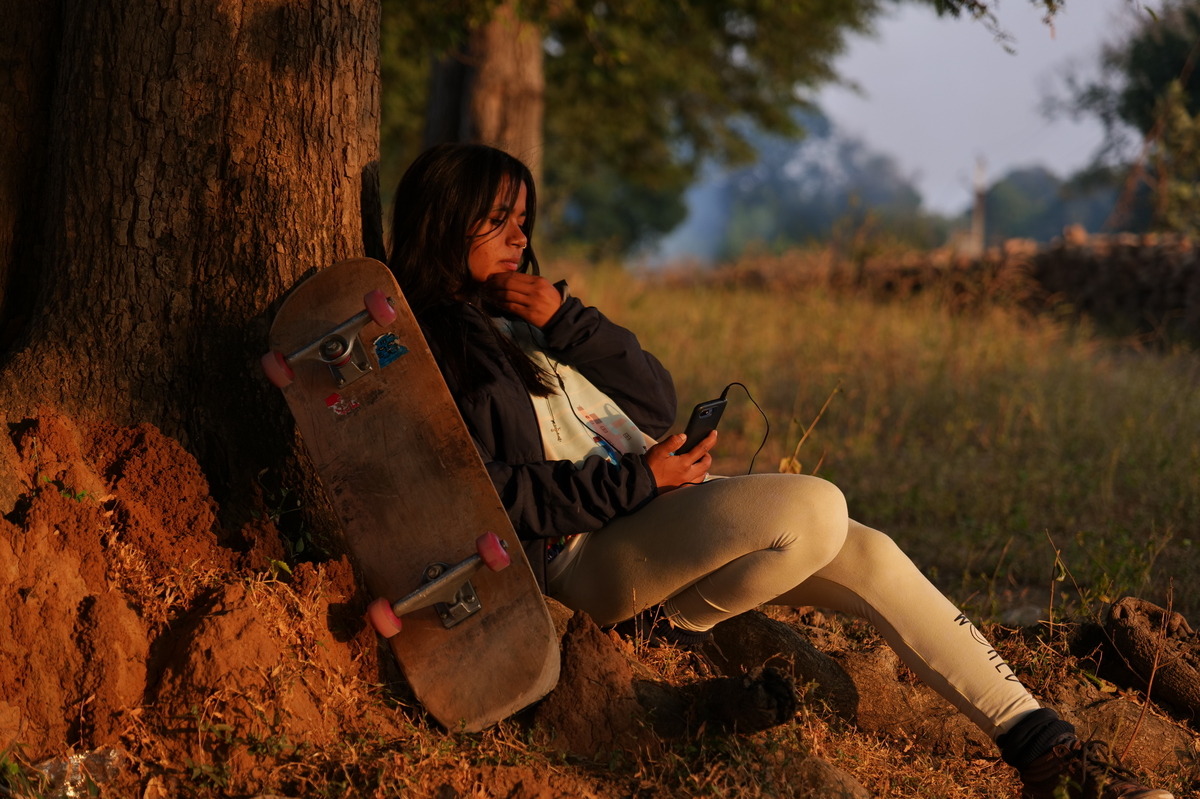 Asha Gond, 21, with her skateboard. She tried the sport when a skatepark was set up in her rural village and is now one of India’s top female skateboarders.

When Asha Gond first started skateboarding, neighbors in her village of Janwar in central India were aghast. They urged the teenager’s parents to keep her busy with housework or get her married. When she walked through the village, skateboard in hand, they would sneer at her and make disparaging comments. Skateboarding is for boys, Gond, now 21, recalls the villagers saying.

Skateboarding isn’t common in Indian cities, let alone remote rural areas like where Gond lives. The skatepark in her village was built by a German social activist. It ignited in her a life-altering passion for skateboarding — a passion Gond has pursued despite the rigid patriarchal norms in her village and one that has taken her to championships overseas.

It’s an incredible story of how one skatepark can change a girl’s – and really an entire community’s – life.

It also happens to be the plot of a new Netflix movie called Skater Girl releasing June 11. The movie chronicles the journey of a rural Indian teenage girl who discovers a life-changing passion for skateboarding after a Westerner builds a skatepark in her village but faces obstacles when she tries to chase her dream of competing.

The filmmakers say it’s a fictionalized account of stories of skateboarding girls in India. But Gond says it’s her story and that the filmmakers never got her permission — even though they met her.

“The things that they’ve shown in the trailer have actually happened to me,” she told NPR in a phone interview.

Why A Rural Village Got A Skatepark

Janwar is a tiny village of about 1,200 located at the edge of a tiger reserve in the state of Madhya Pradesh. Tribal communities called Adivasis make up about half of its population. India’s ancient caste system relegates Adivasis to the bottom of the social hierarchy and they typically live segregated from the rest of the community. When Gond was growing up, Adivasi children like her weren’t allowed to mix or play with their higher caste peers. Girls tended to marry early and the literacy rate was extremely low — especially among women.

Then came the skatepark, built by Ulrike Reinhard, a German business consultant and activist. Reinhard has been mostly living in India since 2012 and much of her work focuses on empowering youth in rural areas. She had been toying with the idea of building a school in rural India. But inspired by Skateistan, an international nonprofit organization that promotes education and gender equality through skateboarding, Reinhard decided to build a skatepark in Janwar.

“It was an experiment,” Reinhard says. “I thought, can a skatepark trigger change in such a stiff and old-traditioned community?”

To raise money for the project, Reinhard reached out to artists across the world to convert skateboards into artboards which she then auctioned.

When she had the funding, she encouraged skating enthusiasts from around the world to come to Janwar to help build the park. About a dozen came and constructed the skatepark with assistance from laborers in the village.The skatepark opened in 2015.

The end result was something most of the people in the village had never seen — or even heard of. Gond said her initial reaction was that it “looked very weird.” Some people thought it was a swimming pool, Reinhard says.

The kids came around quickly and thought the skatepark was cool, says Reinhard. But some adults were skeptical of Reinhard’s intentions and started spreading rumors that she was involved in human trafficking.

Gond’s mother was scared for her. “People would say [Reinhard] is going to sell your daughter and you won’t be able to see her again ever,” says Kamala Gond, who has since come around to support the project.

The German nonprofit Skate-aid provided the first batch of 20 skateboards. Reinhard doesn’t know how to skateboard so she showed the kids YouTube videos on a tablet to get them started.

In the beginning, it was difficult to maintain balance, Gond says.”The skateboard would go ahead when I stepped on it. I thought I would fall over and smash my face.”

But once she got the hang of it, it was all Gond could think of. “I would lie in bed at night and think about how to maneuver the skateboard to do a particular trick,” she says.

Girls Get Priority. And Leave Your Caste At the Door

While members of higher castes don’t get special treatment, girls do. One of the skatepark’s rules is “Girls first” — meaning if there are no skateboards free, a girl can ask a skateboarding boy to give his skateboard to her and he has to agree.

“The girls’ destiny is sealed the day they are born,” says Reinhard, adding that they are typically put to work at a young age and married off early. “So this was a way to tackle the gender [inequality] issue without naming it explicitly.”

Not everyone was happy to see girls skateboarding, much less Adivasi girls like Gond. Villagers would gossip that Gond would be better off learning to cook instead of skateboarding.

“They used to say to my parents, ‘What is she going to do after she goes to her husband’s home?'” says Gond.

Some mornings, Gond recalls, she arrived at the skatepark to threatening messages written on the concrete. “They said they would burn me if I did skateboarding.”

Asha Gond (center right) rides her skateboard. When she first began skateboarding, neighbors would catcall that skateboarding is for boys and urge her parents to marry her off. Vicky Roy hide caption 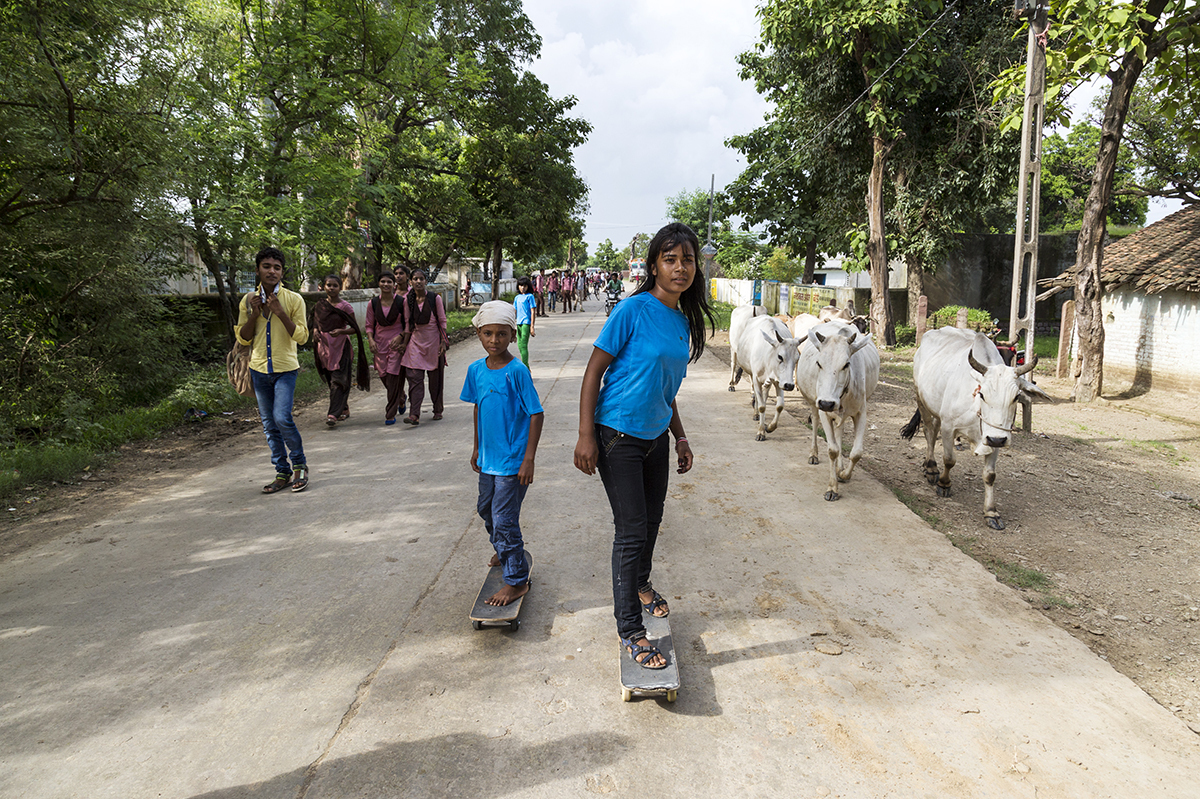 Asha Gond (center right) rides her skateboard. When she first began skateboarding, neighbors would catcall that skateboarding is for boys and urge her parents to marry her off.

But Gond continued to skate and quickly became a rising star in Janwar. Over the years, she’s traveled across India to participate in skateboarding contests. In 2018, she represented India in the World Skateboarding Championship in Nanjing, China. She came in nearly last, but she was the only Indian in the women’s games, competing against many who came from countries with long traditions of skateboarding.

Gond is also co-founder and director of the nonprofit organization Barefoot Skateboarders, which focuses on the education and development of the children in Janwar.

Her mother says she’s proud of her.

“I feel wonderful, I had never imagined that my daughter could do this or achieve what she has achieved,” says Kamala Gond, who says she regrets that she never had the opportunity to go to school and was married when she was a young teen. “What I couldn’t do, my daughter is doing.”

‘No School. No Skateboarding’

The second rule at the skatepark is, “No school. No skateboarding.” When the kids skip school or are kept home by their parents, they aren’t allowed to skateboard. And to make school a better experience, Reinhard partnered with Prakriti School, an organization that focuses on innovative learning, to organize workshops for teachers in Janwar to improve their teaching skills. As a result, school attendance has gone up considerably, Reinhard says.

“We really have created an eagerness to learn,” Reinhard says, adding that they’ve built a second skatepark and a community center that Gond manages where kids can take part in a variety of activities, including painting and karate. “We have a computer lab and the kids are sitting in front of computer screens learning Hindi poems or math”

Reinhard says skateboarding is the oil that keeps the whole machine running. It’s a model that’s been successful in many countries. The nonprofit Skateistan now runs programs in Afghanistan, Cambodia and South Africa. Skate After School, an Arizona-based nonprofit, teaches skateboarding to nurture children from underserved communities.

How does it work? Sports as a means of social change is powerful, says Jyotsna Jha, director of the Indian think tank Center for Budget and Policy Studies. “Especially something like skating, which is novel and thrilling, can really create a sense of achievement among children that they had perhaps never experienced otherwise,” she said via email.

Asha Gond rides over an obstacle known as a volcano at the Janwar Castle skatepark in her village. Aslam Saiyad/Barefoot Skateboarders Organization hide caption 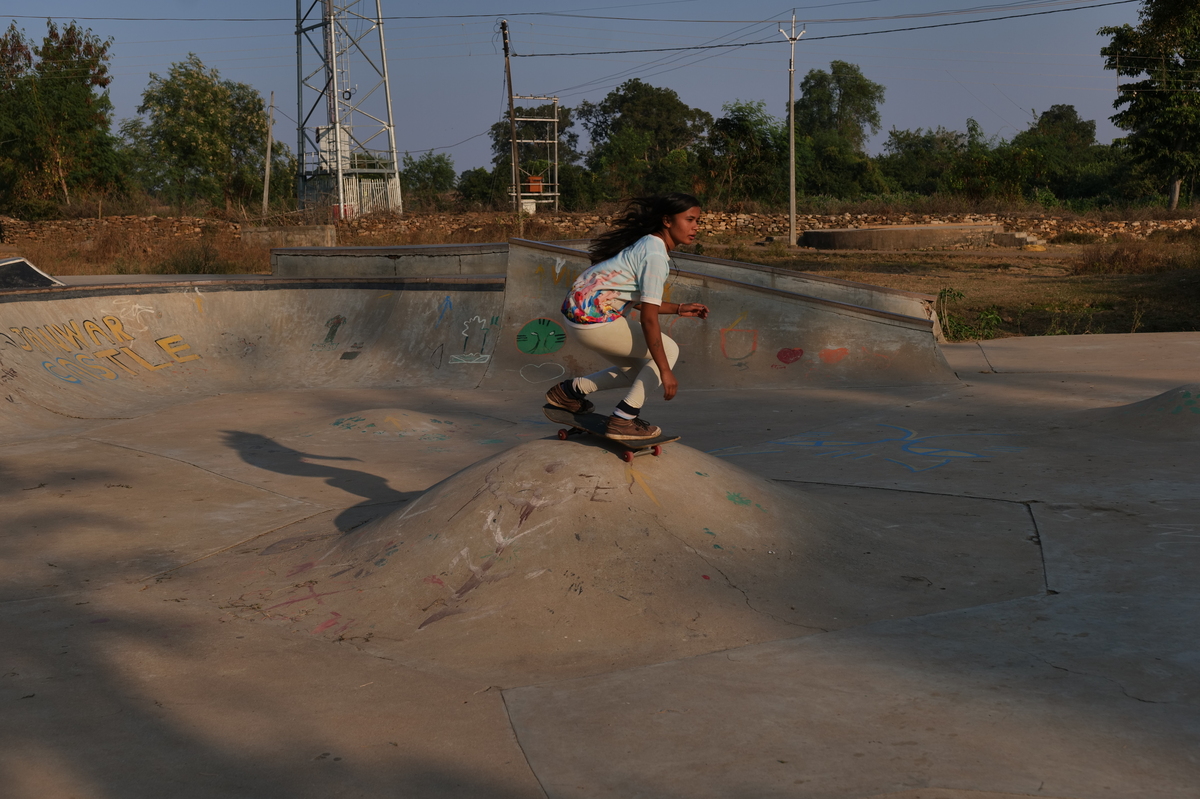 Asha Gond rides over an obstacle known as a volcano at the Janwar Castle skatepark in her village.

Sports has always been a gendered act, she says. “But when a sport is introduced for girls that is not traditionally associated with girls, it helps in breaking many stereotypes and also generating new ways of thinking,” Jha says.

An Inspiring Movie And A Controversy

The impact that skateboarding is creating in different communities is what director Manjari Makijany says inspired her movie Skater Girl. But after watching the trailer, some people on social media familiar with Reinhard’s work and Gond’s story assumed the movie was about Gond and the skatepark in Janwar. But Gond says the filmmakers never got permission to tell her story.

“Why don’t you ask me that you are going to tell my story?” Gond wrote in a comment to a Netflix post sharing the trailer.

In an email to NPR, Makijany denied that the movie was about Gond.

“Skater Girl is not a biopic based on anyone’s life story nor is it a documentary,” Makijany says. “It is not [Gond or Reinhard’s] story.”

In the movie, as in Janwar, the rule is “No school, No skateboarding” and it’s a Westerner — like Reinhard — who introduces the village to skateboarding and builds a skatepark.

Gond says the filmmakers met with her in Janwar and spoke to her about how skateboarding had changed her life and transformed her village. The director says Gond was just one of many girls they met during the making of the movie. The movie was also not shot in Janwar but in a village in Rajasthan state.

Reinhard had a contract to be a research consultant on the movie but says she quit early because of differences over the storytelling approach.

“It turned out to be this kitschy, cheesy kind of thing,” she says.

Reinhard also says from an ethical point of view, the filmmakers should have made a contract with Gond and the other children.

Reinhard’s name and the Janwar skatepark appear in the end credits of the movie, along with the names of other skateboarders in India and around the world. The director says Gond and the other Janwar children were given a chance to be a part of the movie’s climax scene, but they declined.

“We said if this is our story we want to be seen and tell our story. We don’t want to be only in the background of the last scene,” Gond says.

Despite her misgivings, Reinhard says overall, the movie will benefit Janwar and raise awareness about their work and about skateboarding. A new skatepark was built in Khempur village where the movie was shot and is now being used by the community there.

As for Gond, she says she is curious to see the full movie. All she has to do now is get a Netflix account, a luxury most people in her village do not have.