Mehran Mossaddad is a single dad who drives Uber for a living, but when the pandemic hit he stopped because he couldn’t leave his daughter home alone. He fell behind on rent and is facing eviction. JUNE 8, 2021 Lynsey Weatherspoon for NPR hide caption 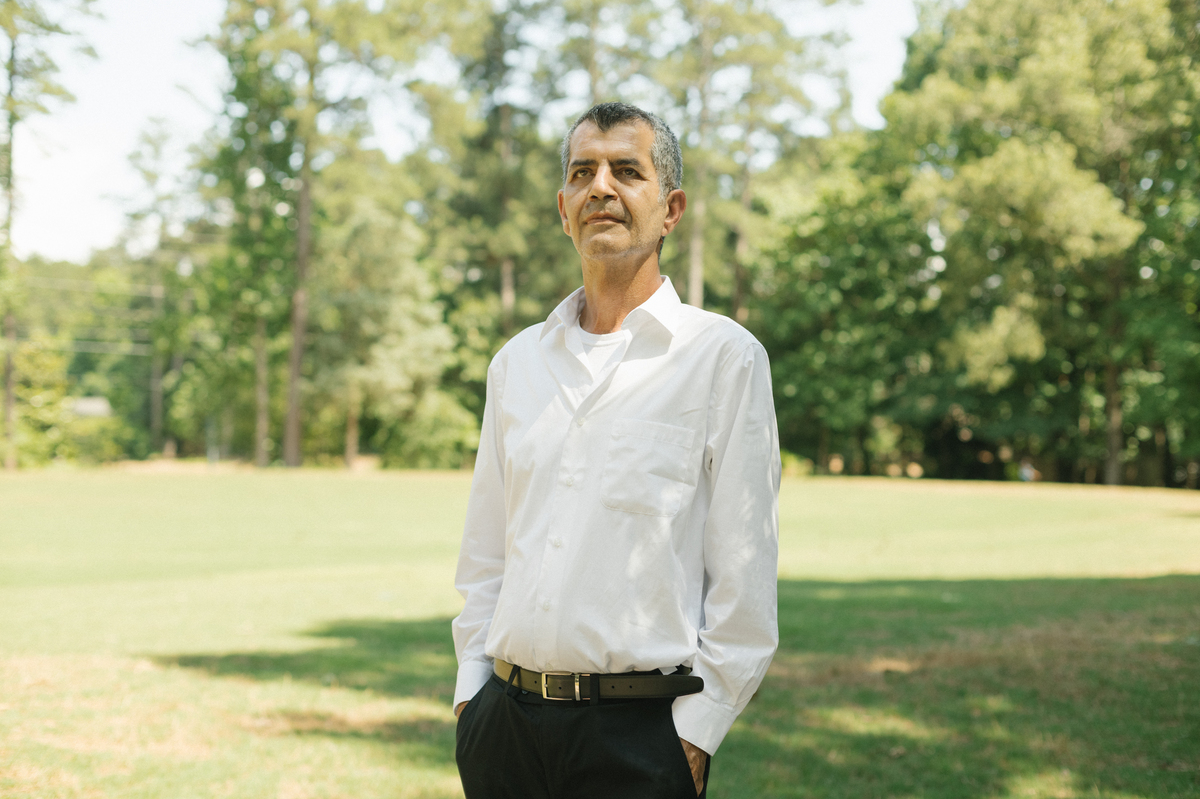 Mehran Mossaddad is a single dad who drives Uber for a living, but when the pandemic hit he stopped because he couldn’t leave his daughter home alone. He fell behind on rent and is facing eviction. JUNE 8, 2021

Mehran Mossaddad has spent much of the pandemic scared and lying awake at night. He’s a single dad with an 10-year-old daughter living outside Atlanta.

“I get panic attacks not knowing what’s in store for us,” he says. “I have to take care of her.”

Mossaddad drives Uber for a living, but when the pandemic hit he stopped because he couldn’t leave his daughter home alone. As a result, he’s fallen more than $15,000 behind on his rent, and his landlord has filed an eviction case against him.

So back in March, when a federal moratorium on evictions got extended, and he heard Congress had approved nearly $50 billion for people to catch up on rent and avoid eviction, Mossaddad thought help was on the way.

Now Mossaddad’s miracle is evaporating. He applied for the federal aid, and was approved. But he and his legal-aid lawyer say the county where he lives caps the amount anyone can receive for back rent at just 60% of what’s owed, with a maximum of $5,000.

“Which is very generous, it really is, but it’s not going to solve our problem,” Mossaddad says. “So things are looking pretty ugly right now.”

The problem he’s run into is that the government effort to distribute billions of dollars to prevent evictions is looking pretty ugly too. At least in some parts of the country.

Seven million people are still behind on their rent, according to the Census Bureau. An eviction moratorium from the Centers for Disease Control and Prevention is set to expire at the end of the month.

“It is a race against the clock at this point to get the money to the tenants who need it to avoid eviction,” says Diane Yentel, the president of the non-profit National Low Income Housing Coalition.

Yentel says the money to help renters is flowing from the Treasury Department to states and city and county governments.

“There are about three hundred and seventy emergency rental assistance programs open and more are coming online every day,” Yentel says. Some of those are just now starting to write checks or are mired in bureaucracy.

“They have, you know, a 10 page application and a long list of documentation requirements, unnecessarily, that slows down the whole process,” Yentel says. Other programs place limits how much a renter can receive, the problem that Mehran Mossaddad has run into in the Atlanta area.

“The resources are meant to assist people just like him,” Yentel says.

The programs impose those limits because they’re concerned about running out of money. DeKalb County, where Mossaddad lives, tells NPR that it caps payments, “in order to serve as many families and households as possible.” But Yentel says many programs are being too careful and should quickly get more money to tenants before they’re evicted.

Other programs appear to be working much better.

“They really streamlined the process a great deal,” says Stephanie Graves a landlord in Houston who owns or manages 1,800 rental units. She set up computers in the business offices of her properties and went door-to-door encouraging residents to apply for the help.

Early on, she says the program was a mess– the portal crashed, applications got lost, there were long delays. She says a group that represents Houston landlords told the city and county, “we’re going to be forced to evict people if we don’t get this together.”

Graves says 20% of residents at her properties, hundreds of people, were behind on rent. Now they’re getting help.

“Over half of those people have gotten funding, are still in their apartments,” she says. She expects the vast majority of the rest to get their back rent paid very soon and she is not moving to evict them.

“The system’s worked, the government funding has helped,” she says. “It’s a great, great thing.”

Other programs are making changes too.

But new federal guidelines are telling the programs to do that; the county now tells NPR it is allowing those direct payments to renters, though Siegel says she hasn’t seen that happen yet.

As far as Mehran Mossaddad and his daughter, he says emerging from the pandemic he’s having some good days, and bad nights.

Some things are getting better. He can drive for Uber and make money again. His daughter had been struggling with remote school; she’s back at in-person school now and seeing friends.

“Now she’s doing excellent,” he says. “She’s gone from the bottom of the class to somewhere at top of the class. She comes home smiling, telling me that she got a hundred on all subjects that day.”

But he says at night he still lies awake, worrying about getting evicted. He’s afraid he could end up living with his daughter in their car with no place to go. “My biggest fear is letting her down,” he says.

Mossaddad says they’ve lived in their apartment for 6 years. He says the property manager has been kind and understanding with him. But the eviction case still looms and the CDC order protecting the family expires in less than three weeks.

Mehran Mossaddad and his daughter are waiting to hear whether their landlord will work out a deal with them to allow them to stay in their home. Lynsey Weatherspoon for NPR hide caption

Mehran Mossaddad and his daughter are waiting to hear whether their landlord will work out a deal with them to allow them to stay in their home.

His attorney Lindsey Siegel says she is offering the landlord a proposal to allow the family to stay: the landlord gets the $5,000 from the county program, Mossaddad catches up on another $5,000 in coming months, and then they call it even. She’s waiting to hear back.

Meanwhile, in case he has to move suddenly, Mossaddad says he has called 40 different landlords. But with this ongoing eviction case on his record, he says all of them have told him they won’t rent him and his daughter another place to live.