The moon appears to cover the sun during an annular eclipse of the sun May 20, 2012 as seen from Chaco Culture National Historical Park in Nageezi, Arizona. STAN HONDA/AFP via Getty Images hide caption 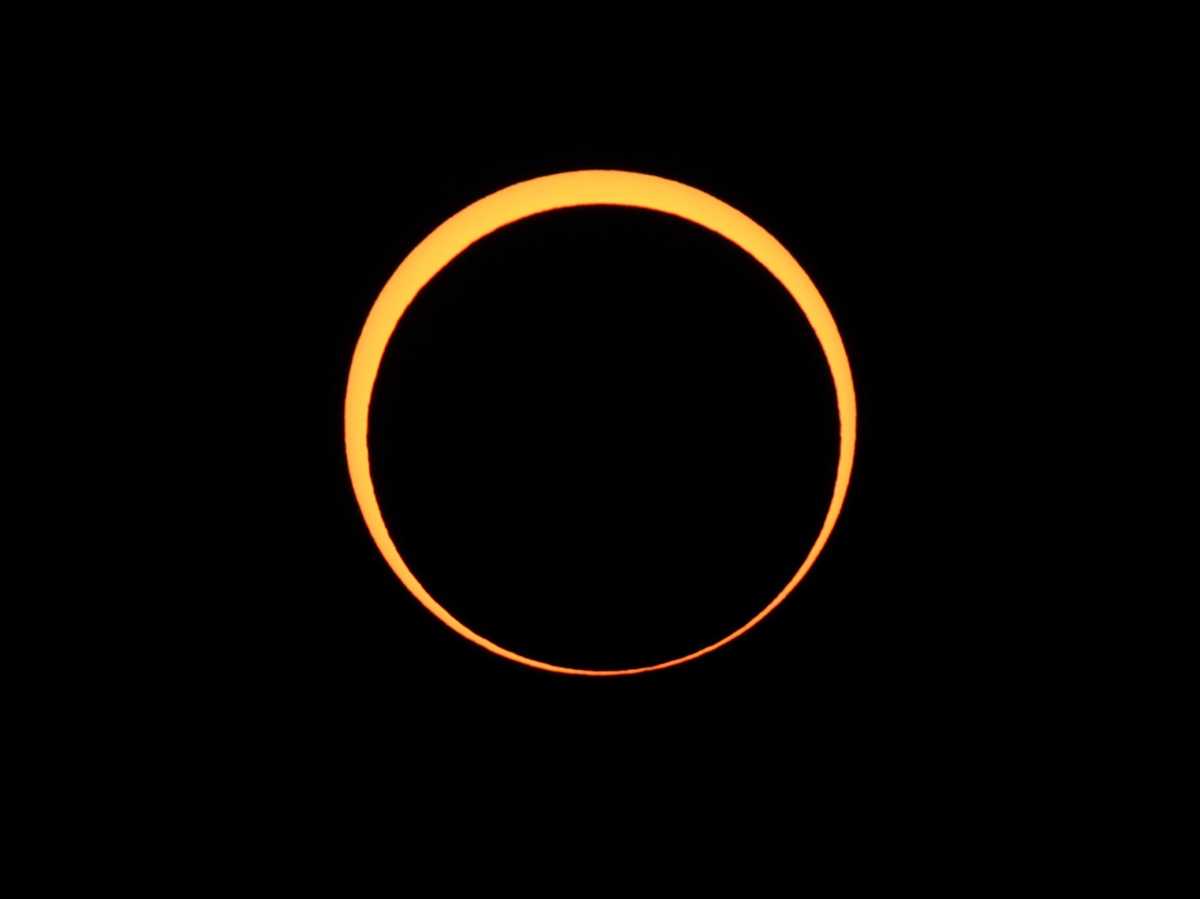 The moon appears to cover the sun during an annular eclipse of the sun May 20, 2012 as seen from Chaco Culture National Historical Park in Nageezi, Arizona.

Early risers across the Northern Hemisphere may see what looks like a “ring of fire” in the sky Thursday morning as the moon passes between the Earth and the sun.

The solar eclipse, expected around sunrise, will appear that way because the moon is at or near the most distant point in its elliptical orbit around the Earth right now, so when it passes between us and our nearest star it will block out just part of the sun. A total solar eclipse happens when the moon covers up the entire sun so that only a haze of light around the darkened moon is visible.

Instead, we humans will catch one of two sights Thursday morning:

Annular solar eclipse: This is when the moon is at its farthest point from the Earth and appears very small. The whole moon passes in front of the sun, creating what looks like a donut hole in the middle of the star.

Partial solar eclipse: This occurs when the three celestial bodies are not perfectly lined up, so only part of the moon passes in front of the sun. In this case, the sun will look like it’s had a bite taken out of it.

Only some people will be able to see an annular solar eclipse on Thursday.

But even a partial eclipse will still appear as if “the ‘Death Star” is in front of the sun as it’s rising,” Jackie Faherty, an astrophysicist at the American Museum of Natural History in New York City, told Space.com.

Where the eclipse can be seen

According to NASA, viewers in the Southeast, Northeast and Midwestern continental United States, as well as in northern Alaska will be able to see a partial eclipse before, during and just after sunrise.

A partial eclipse will also be visible in much of Canada as well as parts of Europe, Asia, northern Africa, and the Caribbean.

People in parts of Canada, Greenland and northern Russia will be able to see the annular eclipse, the agency said.

If you’re unable to see the eclipse from where you are or simply want a clearer picture, NASA is streaming the astronomical event here and here.

The stream, which begins at 5 a.m. ET even though sunrise won’t start until around 5:47 a.m., will show a partial solar eclipse.

How to gaze at the sun safely

What you heard as a child is true: it is not safe to look directly into the sun, even if it is partly covered by the moon.

There are also some creative alternatives to seeing the solar eclipse without risking injury to your eyes, such as viewing it through a pinhole projector or constructing a DIY wooden solar viewer.

Didn’t we just have an eclipse?

Yes! But that was a bit different.

You might be thinking of the Super Flower Blood Moon lunar eclipse that occurred in late May.

The Earth passed directly between the sun and the moon, giving the moon a deep red hue in some parts of the world.